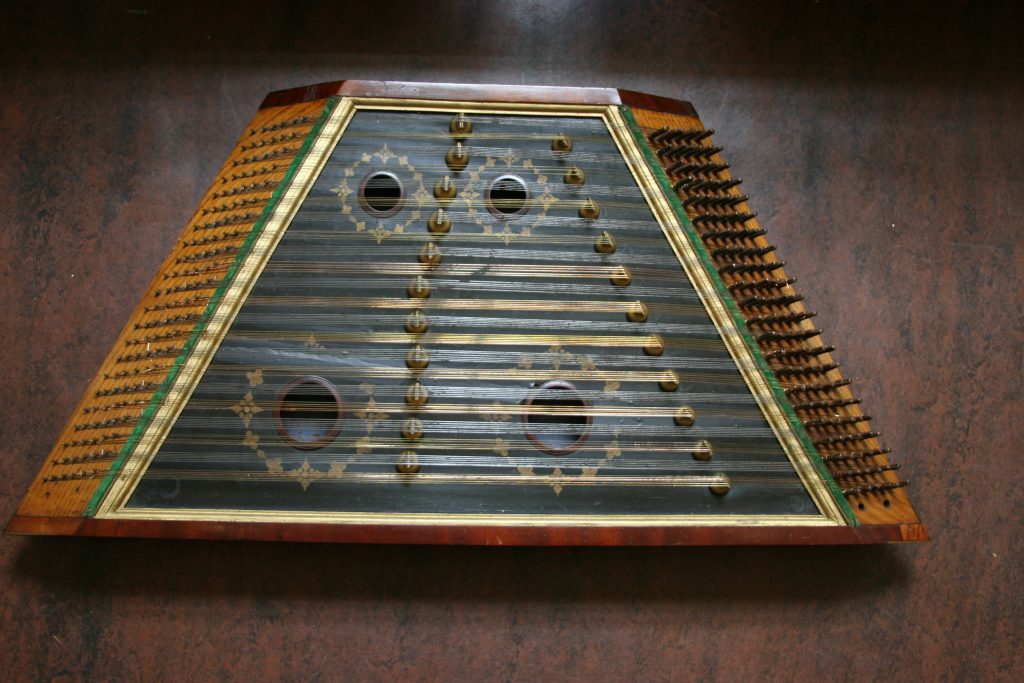 In my riffling around in amongst the musical traditions in my part of the world (East Anglia) I have been fascinated by one instrument above all others, the beautiful-looking and beautiful-sounding dulcimer.

It is sometimes referred to by modern-day folk musicians as a hammered dulcimer, but this distinction is only really needed in the USA where a completely unrelated instrument also exists, which is known as the Appalachian or mountain dulcimer. In England it was always just dulcimer, and in the eastern counties sometimes dulcimore. 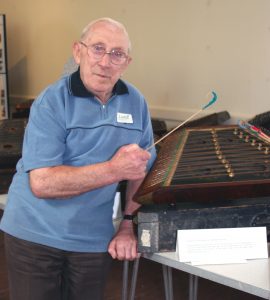 This particularly beautiful dulcimer, made by the very best of makers, Mark Widdows of Norwich, between 1845 and 1889, has proved to have a very interesting passage in its history. I first came across it in 2005, when I met Frank Read, who had owned it since 1983 when his daughter bought it for him from an antique shop in Wymondham, Norfolk, to replace one he had owned earlier in life.

But what of the earlier life of the dulcimer itself?  Well! … the instrument case revealed some surprising information. Written in pencil on the outside of the case – just visible – was the name Henry Edwards and inside the case were various items of ephemera which indicated that, in the early twentieth century, the same Henry Edwards had taken this dulcimer all the way across the Atlantic to New York!

Inspired by the idea of this instrument’s journey, I set off to uncover as much of the story as I could. After a more than usually difficult genealogical investigation spanning nearly a decade, I eventually became confident in my identification of the dulcimer’s owner as one Henry Edwards, born in Norwich in 1863, a bootmaker from a city with a busy footwear industry.

Shortly before the outbreak of World War One, Edwards travelled by train to Liverpool, where he boarded the Caronia on 2nd June 1914, bound for Boston; this was the Caronia’s last voyage before she was requisitioned for war service. He was even luckier with his return journey, made on the Lusitania in April 1915: the Lusitania was sunk just two weeks later, on 7th May 2015, with the loss of over a thousand lives. 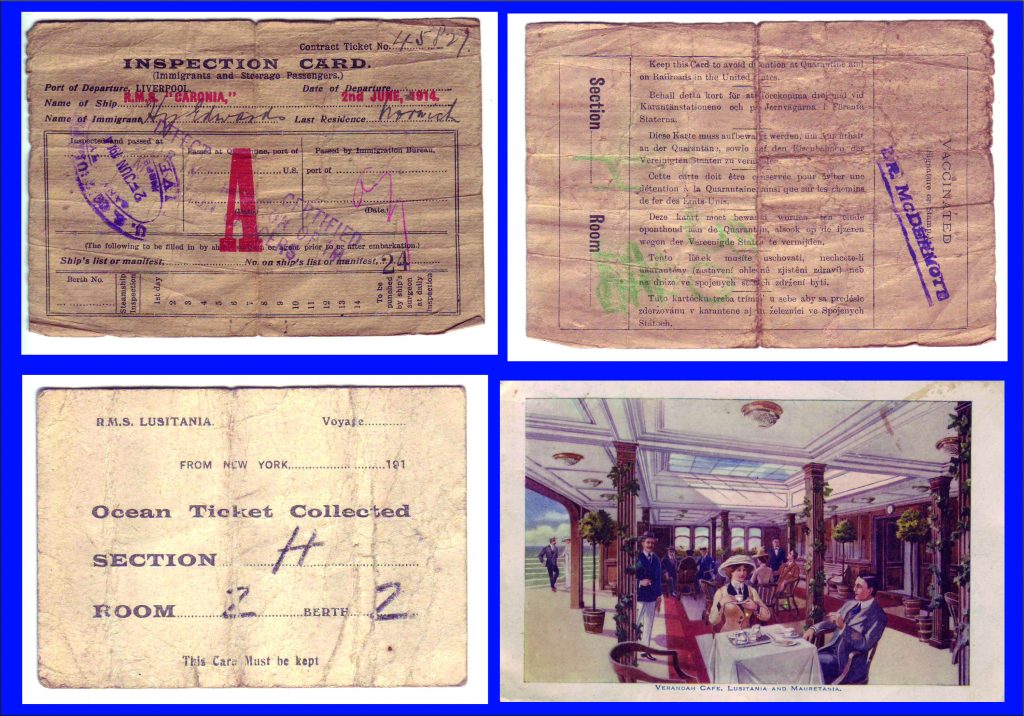 So why did Henry Edwards travel to the United States and where was he heading for?

The Caronia’s outgoing passenger list and incoming passenger manifest from Boston give plenty of detail, not all of which is accurate. Henry’s destination was Canton, a town in St Lawrence County, near the Canadian border in New York State. The shipping manifest states that he was single (he was not) but it also says he would be staying with his son. This inconsistency could possibly be explained if he had separated from his wife – in such cases, the documentation of the time might have classified his position as single, or, he may simply have lied to the emigration officials.  Another incorrect detail is that he is described as living with his father at 5 Trafalgar Street in Norwich. His father, James, had died 20 years previously, but his brother Alfred was living at this address! The documentation from the Liverpool end also gives his trade as printer, and – oh dear – there was another Henry Edwards in Norwich who was a printer, also had a brother called Alfred and a father called James: you can now begin to see why it proved difficult to pin down ‘our’ Henry Edwards! It was a combination of the Trafalgar Street address, and more recently, access to the 1939 census and the United States census records that has allowed me, at last, to make a really positive identification despite these red herrings. The Boston manifest describes his appearance: 5’8” tall with fair hair and grey eyes, and we have no other proof of his appearance.

So Edwards was not the first of his family to make this journey: he went there to visit his son Henry James Edwards, who had emigrated four years earlier.

I did wonder if it was the latter that was the dulcimer player, and his father was delivering it to him, but the fact that Henry Edwards senior brought it back to Norwich suggests it was indeed he who was the owner and player of this instrument.

On his return to Norfolk in 1915, Edwards continued to work in the boot-trade in Norwich, retiring some time before the Second World War. He died in late 1955 at the age of 92, followed within just six months by both his wife and his only daughter.

I can only speculate as to the reason for Henry Edwards’ long sojourn in the United States and why he took the dulcimer with him. He stayed for ten months during which time, back in Norwich, his only daughter got married and his wife would have had to survive without any income from him. He had enough money to sail to the USA and to return (third class tickets in either direction) and had the minimum of $25 with him. Had he intended to make a new life out there alongside his son? Maybe he returned to Norwich only because transatlantic travel was about to close down due to World War One, or maybe because he was needed at home. He wasn’t of a class or a period to take a ‘gap year’ so he must have been working out there. Whatever the truth of the matter, his dulcimer was clearly important to him, and quite possibly playing it was also a way to make some money.

Nothing further is known about the dulcimer until Frank Read acquired it twenty-eight years after Edwards’ death, but I do hope that, after Henry Edwards came back from New York, he continued to play to entertain himself and maybe also his family and community. This beautiful instrument has clearly been treasured over the years, and exists complete with all its bridges and what is probably the original tuning key. It’s also interesting to reflect on the fact that Edwards chose his instrument case as the place to keep the reminders of his once-in-a-lifetime trip to America. 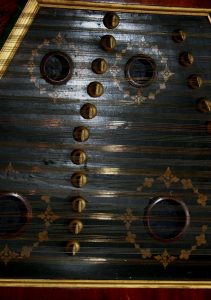 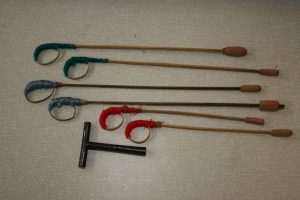 If by chance, any members of Henry Edwards’ family should come across this, do please leave a message here – it would be great to be in touch!

For more about the maker of this instrument, see my article on Mark Widdows on the East Anglian Dulcimers website

I wonder if Henry Edwards might have come across any other dulcimer players whilst in New York State? There were certainly plenty about: Paul M. Gifford has identified many players in the Great Lakes region in a slightly earlier period, but none in the Canton district itself.  http://www.giffordmusic.net/dulcimer.html