MacKenzie’s Lambs and the Leg of Mutton

After investigating the singing Hurr Brothers (see The Real Ben Hurr) I also found evidence of other singing fishermen from Southwold around the turn of the twentieth century.

And one interesting story shows that in the late nineteenth century there were enough singing fishermen for a fair-sized singing contest to be held outside The Southwold Arms on the High Street. 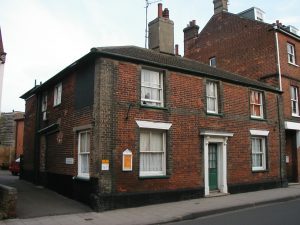 The Southwold Arms stood at 58, High Street, the next building seawards to the present day Sutherland House, and is no longer a pub. It was known as the Green Man until 1803, then the Joiners Arms, until 1839 when it was renamed The Southwold Arms. From 1869 to 1897, it was run by Robert and Sophia MacKenzie and hosted many congenial events for locals and visitors alike. 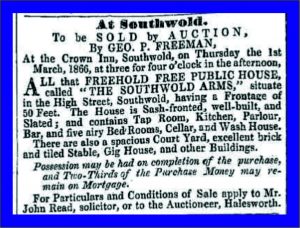 It had several letting rooms, as indicated in this auction notice from the Ipswich Journal of 24th February 1866, shortly before MacKenzie bought it.

A.B. Jenkins wrote a colourful description of MacKenzie in his book A Photographic Collection of Bygones & Local Characters:

“Generally known as “Mac”, was for 28 years the landlord of the Southwold Arms during which time the house and himself earned a very considerable reputation. 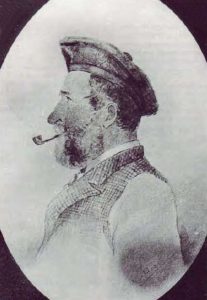 “Mac always wore a tam-o-shanter thus providing the unmistakable hallmark of Scotland. Mackenzie served for 18 months in the Crimea in the Scots Guards later becoming Colour Sergeant; he also served in Canada with the same Regiment when the Fenian Raids were expected from the United States. He was married in St. Martin’s in the Fields, Trafalgar Square to a Dunwich lady who was as popular as he at the Southwold Arms. Mackenzie gathered together a number of well-to-do visitors who stayed at his house during the holidays, and who became known as Mackenzie’s “lambs” and sometimes as the “madcap visitors”.

“Before leaving for home at the end of the holiday the “lambs” used to arrange a sing-song outside the Southwold Arms at which residents in the town were invited to sing for a leg of mutton. The house was illuminated with Chinese lanterns, and the leg of mutton dangled from the sign above the head of the singer, who stood on a table underneath it. Many of the fishermen would compete for the prize, and some of their songs were very long and the concert usually proved a very lengthy affair. A large crowd would assemble so any traffic would have to go along Victoria Street.

“Notwithstanding this gaiety the house was very strictly conducted and Mackenzie would not serve meals until grace had first been said. He did not take female lodgers as he said if he took married couples it might turn out that they were not properly married, and he did not wish his house to be disgraced. He also strongly objected to any lady dancing with any other than her own husband. Mackenzie died in Southwold in 1915 aged 87 years and was given a military funeral by the soldiers who were then stationed in the town.”

A careful investigation of the official records reveals that MacKenzie was born in Caithness, northern Scotland, in 1828. At the time of the 1851 census he was a patient in the Scots Fusiliers Guards hospital, Lillington St, Westminster and in 1861 – after his service in the Crimea – he was in Aberdeen, a sergeant in the Scots Fusilier Guards.

His future wife, Sophia Watling was born in Westleton, a few miles inland from Southwold, and went to work as a cook in well-to-do households in London. In 1865 the pair married, as Barrett wrote, in St Martin-in-the-Fields and by 1868, when MacKenzie received his army pension, they were resident in Southwold. 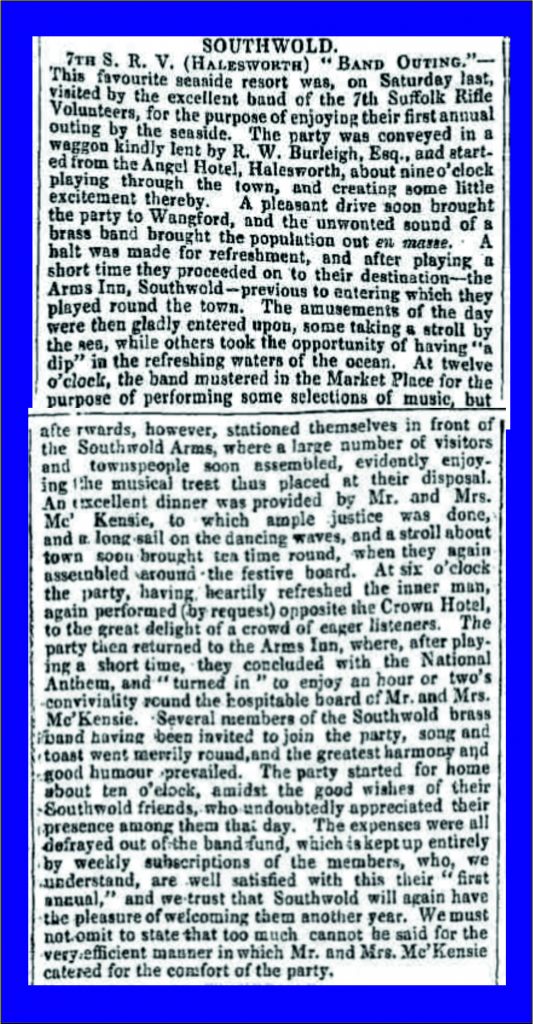 With Mac’s military reputation and Sophia’s culinary one, they evidently made a good team.  Newspaper reports throughout the 1870s and 1880s show that they hosted the Suffolk Rifle Volunteers and other such groups on their annual band outings, providing a base for the day, generous meals and convivial musical evenings at the pub. Here is a typical report from the Ipswich Journal from 24th August, 1872.

After retiring from the pub in 1897, Mac and Sophia lived out their last couple of decades just a little bit further out of town from the pub they had run so successfully for nearly thirty years.

This pub continued to be a place for singing into the mid twentieth century, when social occasions such as darts matches (see foot of the page for info about the photo below, taken c. 1950) provided a convivial atmosphere for a sing song afterwards. 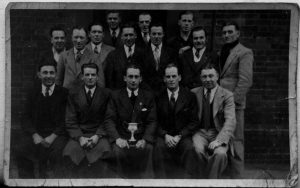 Some years ago I interviewed Hilda Palmer and Dale Peck about their memories and they told me that in the 1970s after a darts match on a Friday or Saturday evening, Frank Palmer (bottom left in this photo) and others including Graham Lewis and Henry, Jockey and Hettie Hurr (cousins of Frank’s) would sing old favourites such as The Faithful Sailor Boy, The Mermaid, The Miner’s Dream of Home and The Rugged Cross, alongside more recent songs such as The Northern Lights of Old Aberdeen, The Happy Wanderer or Red Sails in the Sunset. Comic songs such as Albert & Sadie (a parody of Frankie and Johnny – an old American folksong popularised in 1966 by Elvis Presley) or What a Wonderful Fish the Sole Is were always popular too, with the audience joining in lustily.

The latter song is a curiosity, one of those short pieces that starts out as something innocuous and then turns into an innuendo. Virtually all of the few online references to this song are to do with it being performed in pubs, none before the 1950s:

What a wonderful fish the sole is,
What wonderful fish are soles.
Though I’m glad to relate,
I’m partial to skate,
When served on a plate with rissoles.

This set of words is given on the fascinating website Sound and History together with this little story:

“Just a few days after the BBC visited the Cock and Monkey, the folk song recordist Peter Kennedy turned up to make his own recordings of Burnham and French’s songs. These eventually found their way onto the Folktrax compilation The Londoners.”

Given that Kennedy was working for the BBC in 1954, making recordings of old songs and music, it was probably he who made the first recording of Bill Burnham and Bill French, on 3rd February. The notes to The Londoners gives a recording date of 13th February, and Kennedy commented that The Two Bills were actually barred from singing the Sole song in their regular pub. Kennedy’s collecting notes whilst working from the BBC have been digitised but there are no entries for early to mid February 1954.

Several of the other pubs in the centre of Southwold are known to have hosted singing on a Saturday or Sunday night, but arguably the most significant was the Harbour Inn, which is about a mile out of town, on the Southwold bank of the River Blyth. – See Tales from the Harbour Inn (forthcoming).

Other Southwold stories are told elsewhere on this blog- see: Up from the Sea, The Real Ben Hurr and The Battle of Sole Bay: an unsung song.

For information about the folksong collecting trip in 1910 by Ralph Vaughan Williams and George Butterworth, as well as full details of all the songs sung by the Hurrs, and other singers found on that trip, see my other website https://katiehowson.co.uk/southwold-singers-1910 , where there is also more information about other 20th century singers