The self sufficient singers of the Tilden Smith 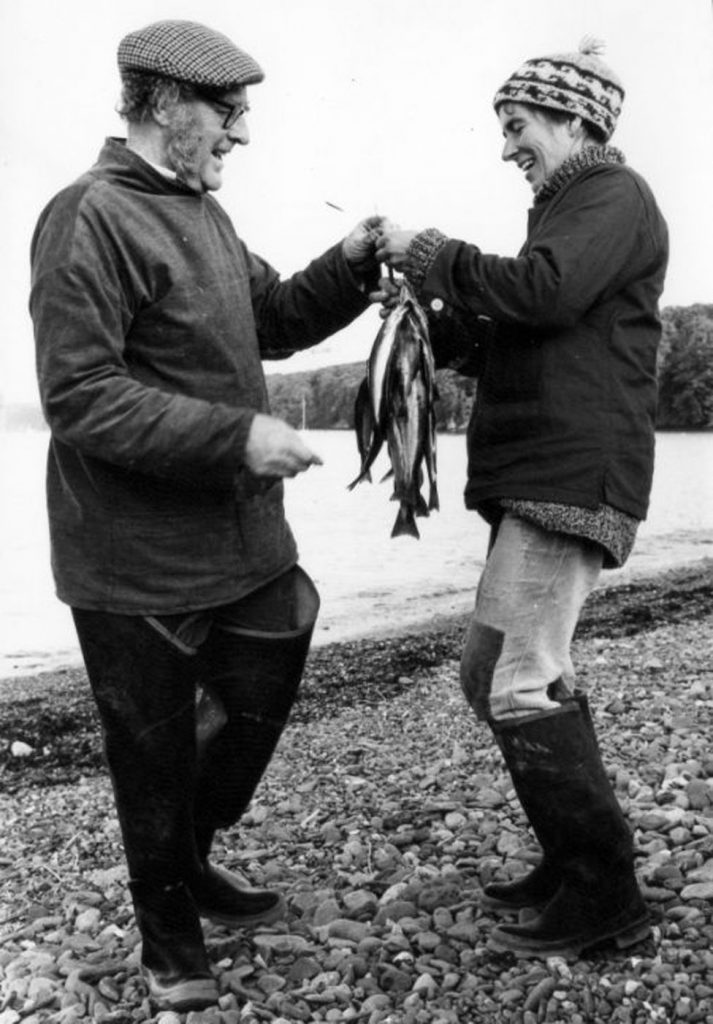 John Seymour is now best known as a guru of the self-sufficiency movement, writing books such as “The Fat of the Land” (1961) and “Self Sufficiency” (1973). He also wrote a number of other books and made many radio programmes, often based around his own travels.

In 1955, with his wife Sally and young daughter Jane, he sailed up the east coast of England and then across through rivers and canals to Liverpool in a 34-ton Dutch sailing yacht; experiences which were to form the basis of a radio series, The Voyages of Jenny the Third and a book published in 1956, Sailing Through England.

John Seymour, whilst probably not considering himself to be much of a singer or musician, could play the melodeon and come up with a song when the company was right, and his writings are dotted with references to singing and merry-making in pubs wherever he found himself. In June 1955, on board the Jenny III he found himself in King’s Lynn, in north west Norfolk, on the banks of the river Great Ouse, a mile or two south of The Wash.

Writing in Sailing Through England he noted that the fishermen

“had seen our strange-looking craft when they were fishing for roka off Hunstanton, and they came, some of them, to have a closer look at us. They took us to the pub that most of them use, the Tilden Smith.”

The atmosphere in the pub, and the singing that took place there impressed Seymour enough for him to write it into his forthcoming radio programme too.

The first programme in this series, The Voyages of Jenny the Third, was broadcast on 9th December 1955 and a significant part of it had been recorded on Monday 4th July in the Tilden Smith pub, on the edge of the old North End in King’s Lynn.  Unfortunately no recordings of the radio programme appear to be in existence, but the local newspaper took a keen interest.

The Lynn News and Advertiser carried a full report in the edition of 8th July 1955 which conveys the atmosphere of the radio recording very vividly. Unfortunately the copy I have is of very poor quality and would be nearly illegible here, so I’ve provided a transcript too.

The Tilden Smith was a pub frequented by fishermen who often had a sing-song in there. You can read more about it the history of the pub and the myth of Vaughan Williams visit to it here.

The main character to come through from the article is Charlie Fysh, whilst other singers mentioned were Tom Benefer, George Smith and Bob Chase.

In Sailing through England, John Seymour wrote of Charlie Fysh:

“Charlie Fysh will be ninety by the time this book is published. He is the Grand Old Man of the Lynn Fisher Fleet. (The Fisher Fleet is the creek up which the Lynn fishermen keep their smacks: the creek a part of which became a railway siding, and which was allegedly stolen from the fishermen.) Charlie gave up fishing a year or two ago, but still spends a lot of his time down at the Fleet, watching the smacks dome in, and he seldom missed an evening at the Tilden Smyth. If I can sing like he can when I am ninety I shall be a happy man.

“Charlie came on board Jenny, and in fact we came to see quite a lot of him. To know such a man is no longer to dread old age. He was very fond of Jane. I got him to record the story of how the Fleet was cut in half, and half of it stolen from the fishermen.” 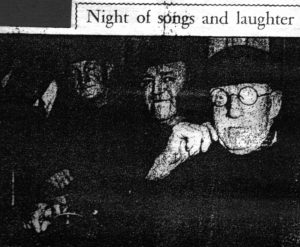 Charlie Fysh (1866-1961) was a fisherman all his life and was brought up in the old North End in a fishing family. Early married life saw him move a little further out, into Birchwood Street, in a Victorian development of terraced housing which was definitely more sanitary than the old North End yards. He sang Old Johnnie Bowker for the radio programme, and a musical gene evidently kept going through the generations, as one of his great grandsons is Roger Taylor, drummer with the rock band Queen! There is more about Charlie on The fishermen that got away post.

Bob Chase (1894-1958) was a son-in-law of Charlie Fysh, married to Charlie’s daughter Elizabeth. He sang one song, Hanky Twanky, on the night of the Seymour recordings. He was born in North End Yard into a fishing family, who moved out to the same area of Victorian streets where Charlie Fysh lived. By 1939 Bob and his family had moved still further out, into the comparative luxury of a council house on Smith Avenue and at that time he was working as a dustman.

Tom “Boots” Benefer (1884-1960) was the son of Harriet “Lol” Benefer, who sang for Vaughan Williams way back in 1905. Tom sang I’m a harum scarum fisherman hailin’ from King’s Lynn town and also Yellow Handkerchief together with George Smith. The first of these is a well-known song usually called Dogger Bank and the second is sometimes called Flash Company and is particularly well known in Suffolk. Tom was born into a fishing family in the North End and also sold fish. He took on a grocer’s shop in Pilot Street (still in the North End) from where he also delivered samphire, a local seaweed delicacy, on a small handcart.

George “Young Bussle” Smith (1885-1970) was also the son of another singer, and his father, known as “Old Bussle” might well have been the “Mr Smith” who sang Bold Princess Royal for Vaughan Williams in the North End in 1905. He followed his father into fishing, and married Harriet Benefer, Tom’s sister in 1911. She died a decade later, and at the date of his second marriage in 1923, he was still fishing, but by 1939 he and his second wife Agnes had moved out to Smith Avenue and he was working in the sugar beet factory at the time the 1939 register was carried out. “Young Bussle” sang Golden Slippers and Drunken Sailor for the 1955 radio programme, and also Yellow Handkerchief with his brother-in-law Tom Benefer, and there are actually recordings of him singing from the 1960s, including these songs plus Rarum Tearin Fisherman, Rattling Old Grey Mare, Mother Machree, Fill up Your Glasses (Be Easy and Free), Bonnets of Bonny Dundee and The Land of the Shamrock Shore, although unfortunately his voice was rather weak by then. Younger members of his family still know the words to Golden Slippers, but I’m not sure any of them are active singers.

There is more about “Bussle” Smith on The Herring Singers post.

You can hear the appreciation for these men’s singing in John Seymour’s words, again from Sailing through England:

“But at least the young men who still use the Tilden Smith who are no longer fishermen were brought up to be fishermen, and they still have some of the dignity, and independence of bearing, of inshore fishermen. The Tilden is still a fisherman’s pub. You hear some good songs there: so good that we went back later on with Francis Dillon and a recording car, and recorded an evening’s session for the wireless.”

More about Vaughan Williams’ visit to King’s Lynn in 1905 is on my other website: and The Other Mrs Benefer on this blog is about Tom Benefer’s mother, Lol, who sang to Vaughan Williams.

The Seymour family website has a potted biography of John Seymour.

Thanks to Trues Yard Fisherfolk Museum, from whose archive the original newspaper cutting was supplied.