Will the real Paddy O’Rafferty please stand up!

This is one story of several inspired by the music on a barrel-organ which Admiral Sir William Edward Parry took to the Arctic journeys between 1819 and 1825. I have been looking at this material for a couple of years now, and this article is the first one out of the treasure chest! Please see the foot of this page for credits for this original research.

About two thirds of the 40 items on Parry’s barrel-organ are dance tunes, with some hymns and patriotic songs. Dancing was an incredibly popular pastime in that period for people of all classes, mostly done with a partner in a longways formation, and tunes for the dances proliferated with the expansion of printing, being the equivalent of buying recorded music in the twentieth century.

The tunes on the barrel-organ are absolutely typical of the period, including English and Scottish reels, with just two jigs, both with distinctly Irish sounding names:  Paddy Carey, which is a staple of the English session repertoire these days, and Paddy O’Rafferty, a well-known tune in the Irish repertoire, which I decided to investigate in some depth. Rather than go in strictly chronological sequence, I’m going to look at some of the various incarnations of the entity that is Paddy O’Rafferty, starting with the dance tune (and a passing mention of the dance itself). If you’re interested in the chronology of its early history, there’s one at the end of this article.

So here begins the interesting and complex back story for the multi-faceted Paddy O’Rafferty. 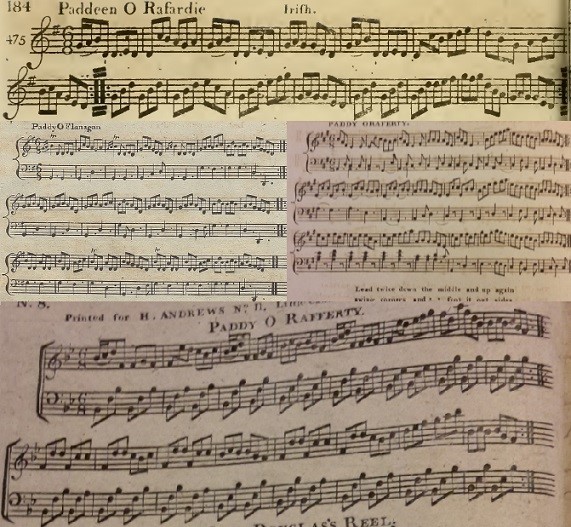 In 1795 a tune by this name was collected from the playing of a Mr. J.McCalley of Balleymoney, Co. Antrim by Edward Bunting. A year later, a jig Paddeen O Rafardie was published in Glasgow by James Aird: that’s the one at the top here. In the middle you can also see very brief dance instructions – the dances were all in the same longways configuration and the figures were very formulaic.

From 1801 the tune was enormously popular as a dance tune at balls for the “nobility and gentry” when it often featured as the first or second dance of the evening.

The lack of copyright legislation (more of that later) allowed for frequent republishing of the tune and it turns up in dance and tune publications very regularly – as can be seen here – in many different settings; from two parts up to five parts, usually with something in common with other versions!

This image comes from the brilliant Regency Dances website – see below for the link.

So far, so relatively simple, despite the large number of variations on the tune.

There is also a song by this name, so next I began to investigate the Vaughan Williams Memorial Library and the Irish Traditional Music Archive, the Bodleian Library and other places where we are used to searching for “folk” songs. 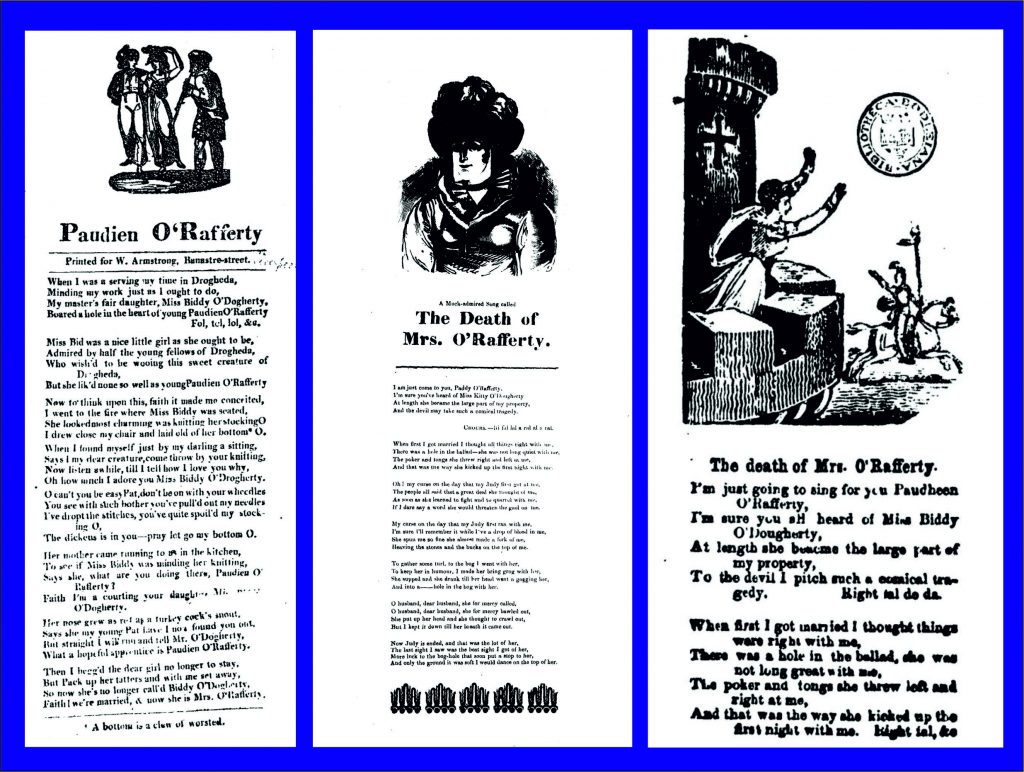 These archives revealed a number of publications – broadsides dating from at least 1820 and songsters from later in that decade – printed in both England and Ireland. There were also some unrelated songs – “to the air of Paddy O’Rafferty” – showing how ubiquitous the tune became. The English and Irish broadside texts fall into two broad groups.

The first concerns Paddy O’Rafferty’s courtship and marriage – as seen in the example on the left, printed in Liverpool

The second group of songs is about how the marriage disintegrates – and ends with Paddy knocking his wife into a bog, burying her and dancing on her grave – as seen on the examples centre and right – the one on the right winning the prize for the most inappropriate woodcut illustration! She certainly could have done with a knight on a white charger, and it certainly wasn’t Paddy O’Rafferty!

Given the lyrics, I’m personally quite glad that these songs don’t seem to have survived much beyond the end of the nineteenth century – singer Elizabeth Cronin from Co. Cork is said to have known a song by the title of Paddy O’Rafferty, but in the book “The Songs of Elizabeth Cronin” Dáibhi Ó Cróinín took a set of words from an un-named ballad sheet (possibly from the Joyce collection), which is the Death of Mrs O’Rafferty song, which gives her name (as do the others here) as Biddy O’Dougherty  – conveniently rhyming with “property” …! 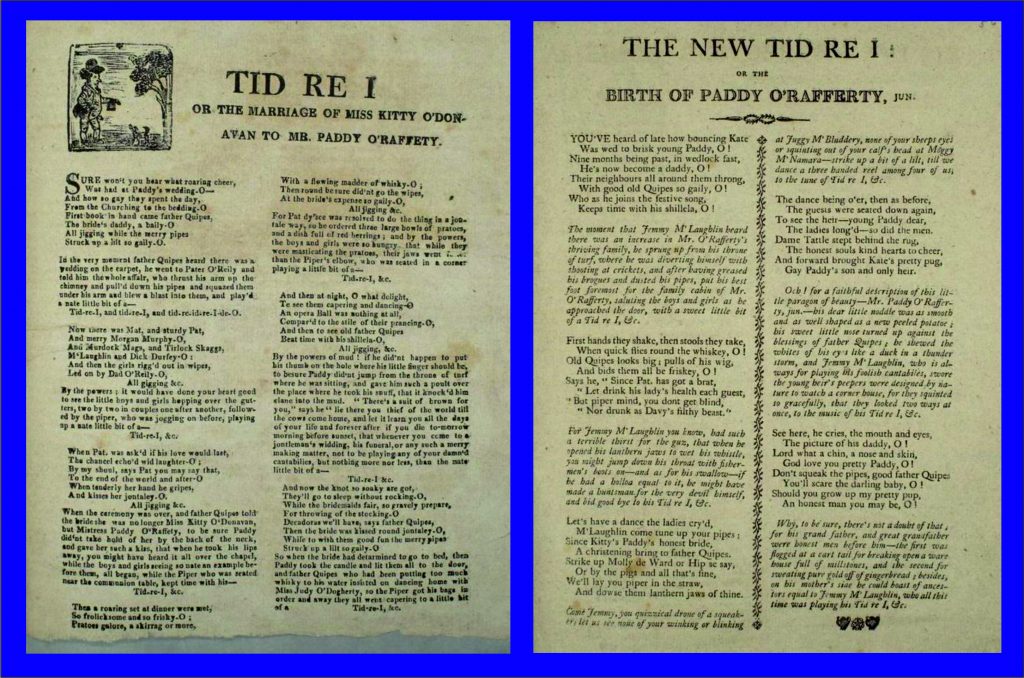 Meanwhile, on the other side of the Atlantic, we find Paddy O’Rafferty marrying another woman! – Kitty O’Donovan – and a completely different set of words, in a cantefable setting. This song – Tid Re I – was printed both as a broadside, and as sheet music with a tune, and it’s not clear which came first. 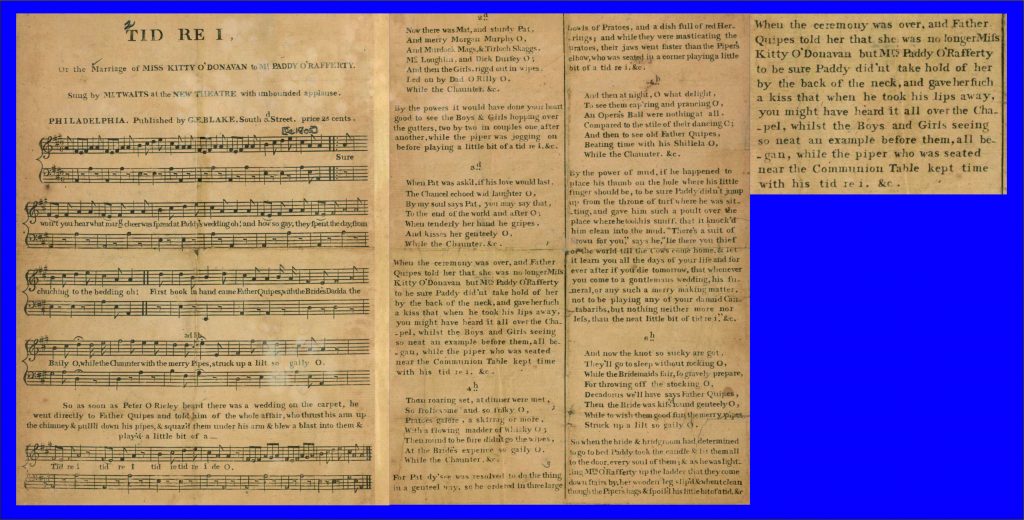 Certainly this song and skit was a big success for the English singer and actor William Twaits, who was engaged for the 1803 winter theatre season in Philadelphia, where this sheet music (above) was published soon afterwards.

So where did these words come from? And is this tune the same as the dance tune? No, of course it’s not, that would be far too straightforward!

Well, once you take off your “folk” binoculars (hopefully not blinkers!) this is when it starts to get even more complex, as the wider context for this song begins to be revealed.

Lack of copyright laws and legislation on what could be staged in different types of performance venues meant that songs, dramatic pieces and stage characters were used and re-used, revived and repurposed. That certainly turns out to be the case with this song Tid Re I, as the verses for this song – without the “patter” were actually written several years before, by the English composer and performer Charles Dibdin. He sang his own composition The Irish Wedding in London at the end of 1796, in a musical revue entitled “The General Election”, in which he interpolated the song with some rather more high falutin’ versification and in his original version, the groom was named only Paddy or Pat and the bride was anonymous.

The stage character and Paddy’s Rambles across the western world

So it’s becoming clear that this character Paddy O’Rafferty had a life on the stage and there is plenty of detail in the newspapers and journals of the early nineteenth century, revealing Paddy O’Rafferty’s rambles around the theatres of England, Ireland and America.

In the period before music hall developed, a night at the theatre consisted of at least three or four separate items which could include a couple of dramatic pieces, maybe a farce or a pantomime, and in the middle, an entr’acte entertainment which might be a stand-alone song or dance item. There was often a prologue or afterpiece as well, so it could be a long night! And almost all plays in the Georgian period included songs, which could be chosen at short notice during a season to suit the character. 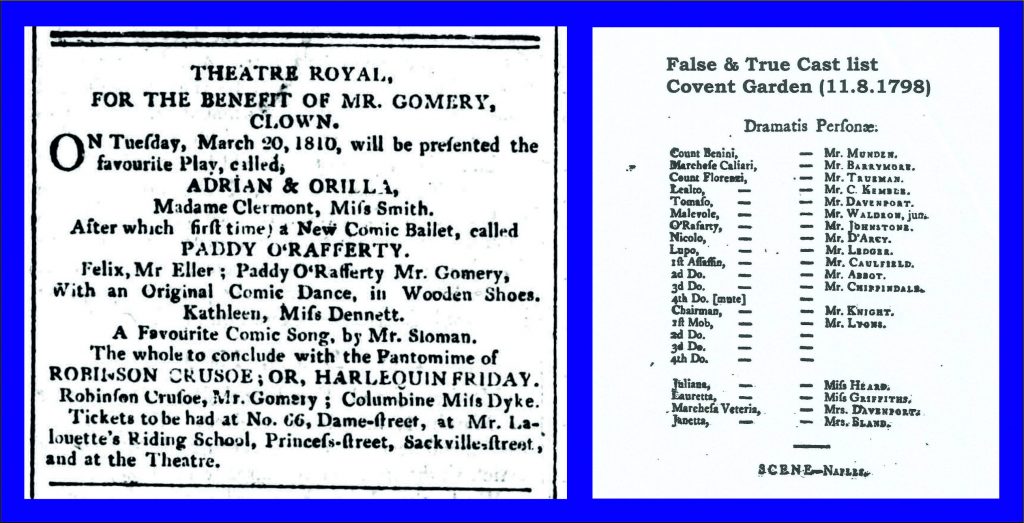 The cast list on the right above, from 1798, shows John Henry Johnstone, an Irish actor, playing the part of Paddy O’Rafferty in a new farce called “False and True” which premiered at Covent Garden, then toured the English provinces – and was staged for the first time in Ireland at the Dublin Theatre Royal in April 1799. Although Johnstone sang songs in this production, none are related to “our song”, but the character has now been established.

From then onwards, Paddy O’Rafferty pops up regularly in the English and Irish theatre, sometimes in a comedy, sometimes in an entr’acte entertainment. The character also toured America. Perhaps the person who really made the part of Paddy O’Rafferty his own, was another Irishman who specialised in playing “Stage Irish” parts in both England and Ireland, the enigmatic Mr. Webb, in the centre below – about whom nothing at all is known, despite a recent trawl of a variety of primary sources – although the details of his 1822 season in Dublin are charmingly revealed in “The Daily Visiter or Companion for the Breakfast Table” published in Dublin.

There were a number of plays featuring various stock Irish characters, including Sir Callaghan O’Brallaghan in “Love a La Mode” and Major O’Flaherty in “The West Indian” portrayed here respectively by Johnstone on the left above and Webb in the centre …… hmm!!!

On the right above is another favourite Irish “delineator” Tyrone Power (ancestor of a whole dynasty of American actors with the same name!) who again played all the stock “Stage Irish” parts and took the part of Paddy O’Rafferty many times, notably in his own reworking of the 1798 farce “False and True” into a “new” piece “Born to Good Luck” in 1832.

Many other lesser known actors also played the character of Paddy O’Rafferty during the course of the nineteenth century, in provincial theatres up and down the land.

So our whistle-stop journey through Paddy O’Rafferty’s kaleidoscopic existence concludes – and here is a brief chronology to round it off.