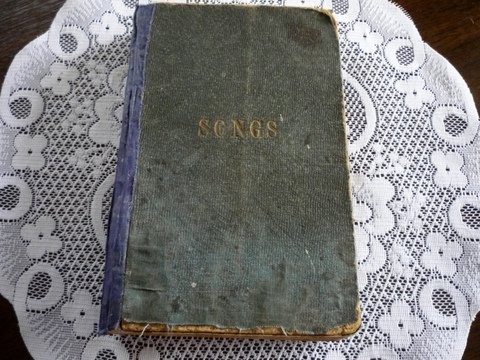 Some years ago I came across a mention of a handwritten book of songs from King’s Lynn in Norfolk, the personal collection of one Henry Flanders.

Having a long-term interest in the songs found in the town by composer and folk song collector Ralph Vaughan Williams in 1905, and then by oral historian Mike Herring in the 1960s, I was fascinated by the idea of this nineteenth century songbook showing us what was sung way back in the 1860s.

I contacted the owner (who was of one of Henry Flanders’ great-granddaughters, living in New Zealand) and we began a friendly correspondence, swapping information over the years. She sent me lists of the song titles, scans of some specific pages I had asked for and much biographical information, and I found her great grandfather’s second marriage and numerous newspaper articles to send her in return. We were in the process of arranging for the entire book to be scanned when she unfortunately became ill, and for the moment, things are on hold.

However, I had committed myself to including information about the songbook in a presentation for a conference entitled “The Folk Voice” in April 2021 (see Further Information, below), so I had to persevere, working mainly from the title list. The significance of the book lies not in a particularly unusual set of songs – they are all available in print elsewhere – but in the fact that it indicates the repertoire of a singing man in the late nineteenth century.

Whether or not Henry Flanders might be classified as a “folk” singer was one issue I was interested in: this is a collection of songs unmediated by the eye or ear of any folk song collector – whether or not it represents the “folk voice” is a matter for debate!

Who was the owner and compiler of this book? 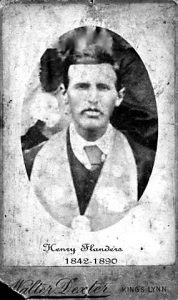 Henry Flanders was born in 1842, the son of a clay pipe-maker living on St Ann’s Street in the North End of King’s Lynn. Henry’s older brother followed in the pipe-making business, and the family ran a shop and pubs in the street too. Henry himself became a mussel fisherman and shellfish dealer, trading in whelks for the London market. According to family tradition he supplied Queen Victoria with shellfish when she was in residence at nearby Sandringham.

The streets around the North End teemed with life, with many people leading cramped existences in the narrow and unsanitary yards, but Henry’s home was slightly more comfortable, facing onto one of the main streets, St Ann’s Street, with an entrance (through the gateway on the left of this photo) to Lane’s Yard which was the scene of a dispute between neighbours in 1875 – Henry was a witness. 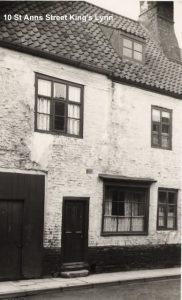 The newspapers of the time also detail some court cases about illegal fishing. Henry licensed mussel grounds (stone banks man-made for the purpose) in the Wash, and there are reports of other fishermen trying to fish these grounds, and of accusations of fishing in the closed season. The mussel beds were about seven miles from the fishing port in Lynn, and often necessitated a very early start in the morning and occasionally sleeping overnight on the boat. Henry owned various boats between 1873 and his death in 1890, including the Queen, Charles & William, Henry, Gainsboro Lass, Dove and Wave. These were, I think, fishing smacks, sailed by a crew of two or three men, catching mussels, whelks and shrimps according to the season. We can hear Henry’s own voice in an 1883 newspaper report:

“I hire from the Norfolk Estuary Company a stone bank for the purpose of getting mussels therefrom. I hire the bank from year to year, at £3O per annum for the first three years, and then £10 a year afterwards.” 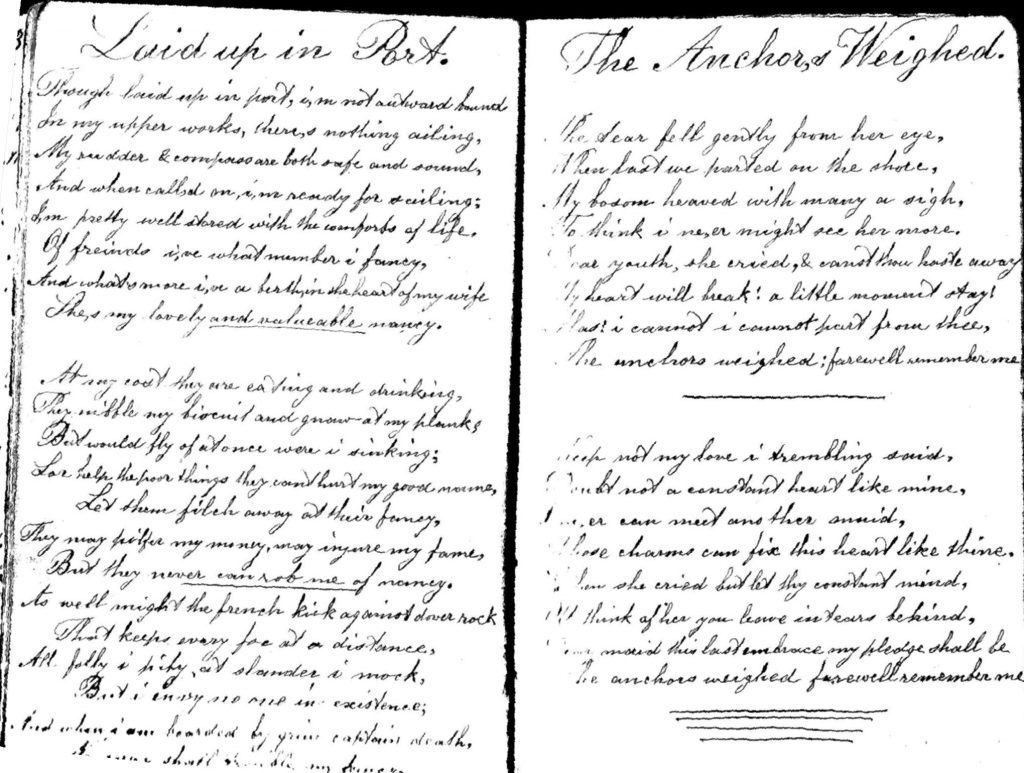 This evidence, together with the flowing and elegant handwriting seen here in the song book, and the Masonic or Friendly Society sash he wears in the photograph, indicates an upper-working class man rather than someone scraping along at the bottom of the pile.

So what does the selection of songs reveal? A man with middle class pretensions singing parlour songs, perhaps learned through membership of a harmonic society? A man who enjoys visiting the music hall and concert stage? Someone who enjoys a sing-song in the pub on a Saturday night and is looking for new songs? A fisherman writing down his family songs for posterity?

In total there are 150 songs and I’ve done a preliminary analysis of 90 of them, to try and shed some light on these possibilities.

What type of songs were in Henry Flanders’ book? 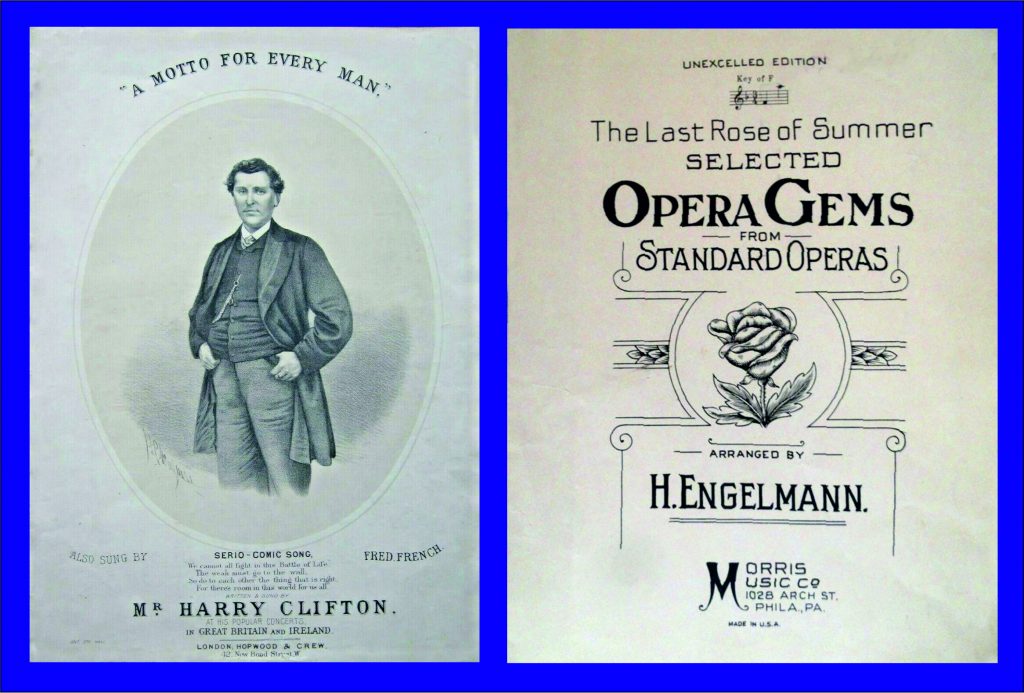 They are a real mixture. The initial impression was one of mainly “parlour” songs, which were in their heyday in the 1860s and 70s, when Henry was a young man. Many of these were published on sheet music and this really represented the early stages of our modern popular music industry, with some songs selling hundreds of thousands of copies and becoming huge “hits”. King’s Lynn had several music shops and stationers where these would have been available. A surprising amount of these songs were also published on song sheets and broadsides which would have been sold on street corners, at fairs and the town’s annual Mart.

Where might Henry Flanders have come across these songs?

Flanders may have bought or borrowed them in print of course, but he would also have had the opportunity to hear live performances of some of those minstrel and theatrical songs locally. 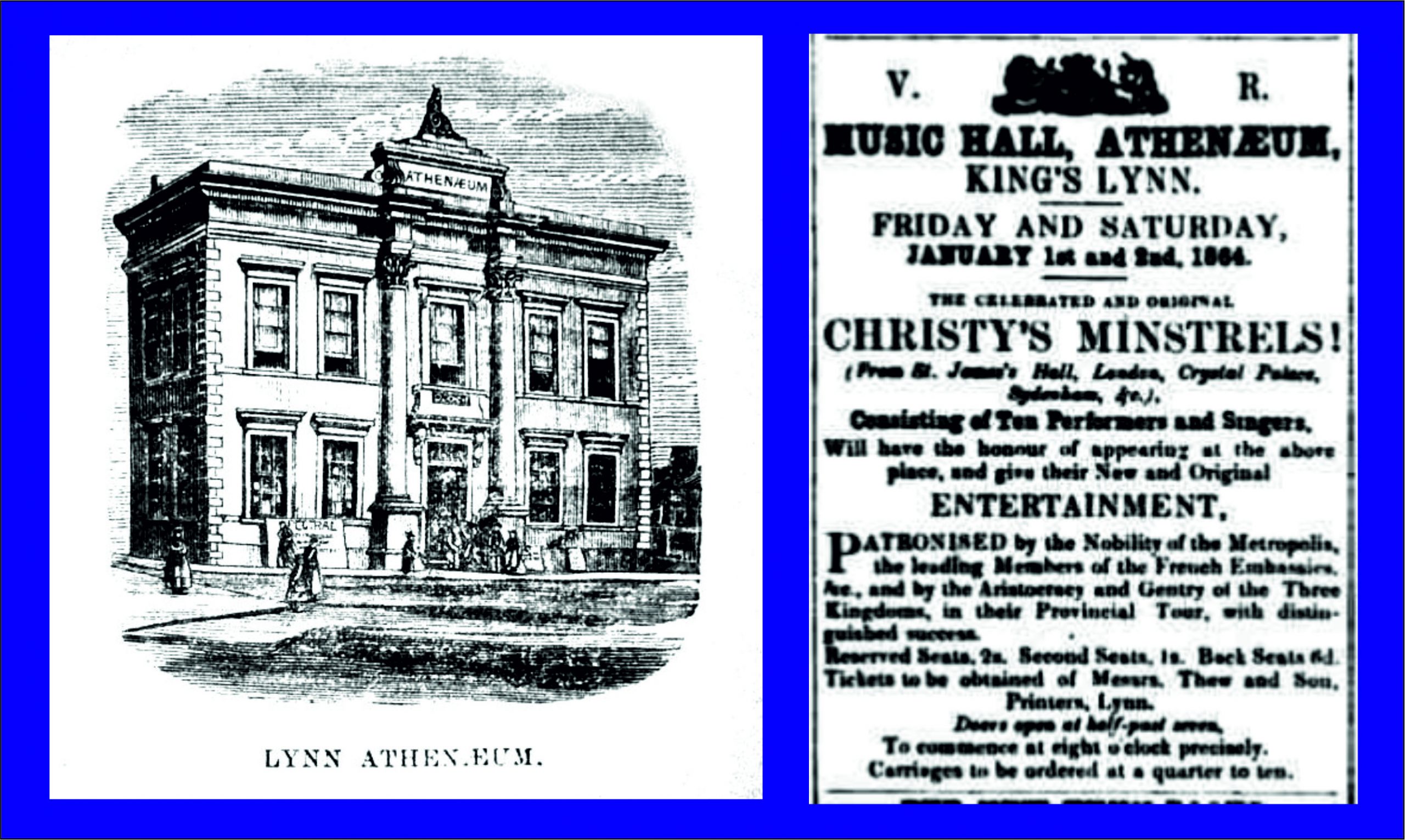 Just five minutes’ walk from home, into the town centre, was the Music Hall at the Athenaeum, which in the 1860s and 70s provided opportunities to see top singers in a ballad concerts, such as Sims Reeves and Madame Sainton Dolby, as well as the various, highly popular, line-ups of Christy Minstrels.

These variety shows involved white people blacking up and singing largely sentimental songs, doing “eccentric” dances and some comic sketches. They became respectable family shows, popular with all classes, and a number of their very memorable melodies live on in the folk tradition today, thankfully without their lyrics or dressing up. The professional touring groups inspired amateur groups performing the same material, and a newspaper report of 1867 gives details of the Amateur Christy’s Minstrels. This group consisted of eight men from the town, the star amongst them being Cassius Boyce, a plumber who had once harboured ambitions of being an artist, and other members were Walter Dexter, a photographer; John Larwood, butcher; Joseph Batterham, corn merchant; William Plowright, cabinet maker; John Samson, licensee of the Ship Inn; Robert Offord, cutler and Edward Doyle, watchmaker. Between them they sang and played flute, violin, violoncello, banjo, tambourine, bones and piano, and Boyce performed an “eccentric dance”.

In a sweet little coincidence, the photographer who took Flanders’ portrait (above) was actually Walter Dexter – but I’ve no evidence of Flanders himself being involved in this or any other minstrel group. 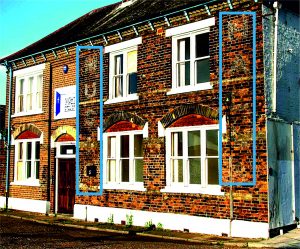 There were certainly places in the North End itself where Flanders might have sung. The Dock Hotel stood on the corner of his street, and had its own “Music Hall” – the words still appear faintly on the wall in this modern photograph – and without walking more than a hundred yards, he would have had a choice of more than a dozen pubs.

He certainly built up a very large stock of songs, suggesting an active involvement in singing somewhere, and an interest in acquiring new material.

What if Henry Flanders had met Ralph Vaughan Williams?

Henry Flanders had lived another 15 or so years, he might well have got a visit from folk song collector and composer Ralph Vaughan Williams, who stayed in King’s Lynn for a week in January 1905 and noted down over seventy old songs, many of them from the fishermen and their families in the North End.

Flanders would have by then been in his sixties, a fisherman living in the North End, so he would have fitted the profile of a typical interviewee, although as previously noted, he did live in a rather bigger house and perhaps have a more comfortable lifestyle than some of the singers Vaughan Williams visited.

No doubt Vaughan Williams, in search of ancient melodies, would have asked if he knew any old songs.

If Flanders actually knew how old his songs were, he might have suggested some of the oldest in his repertoire such as Black Ey’d Susan, Roast Beef of Old England or Tom Bowling but these would probably have been deemed too ‘commercial’ in style (as well as originating from known writers such as Charles Dibdin), and Vaughan Williams would probably have been more interested in others such as Lash’d to the Helm or Tars of the Blanch. These two sea songs seem to have been published only on broadsides – song sheets sold on the streets, with just the words, and no music attached.

I compared his self-selected collection of songs with those noted by folksong collectors in the twentieth century and found the main differences to be that Flanders had a large number of songs with sentimental, comic and romantic themes, which were not represented in the 20th century collections. The themes of the sea and heroicism were found across the different periods, with a high percentage of such songs in the Vaughan Williams’ collections. 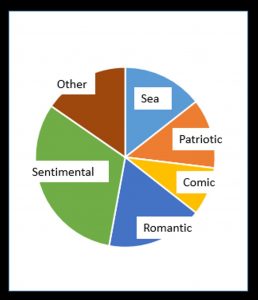 This came as no real surprise, but there were two things which did surprise me:

Firstly, not one of Flanders’ songs is to be found in Vaughan Williams’ collection from 1905. This could be at least partly due to the fact that Vaughan Williams was particularly looking for old folk songs, and much of Flanders’ repertoire was less than 50 years old). However, the second surprise challenges this view, as over 70% of the 90 songs have actually been found within the “tradition”.

Eleven of these songs have been recorded from two famous traditional singers from elsewhere in Norfolk, Walter Pardon and Sam Larner. They both lived over 50 miles from King’s Lynn, so I am not suggesting any direct link between them and Flanders, just noting that these “traditional” singers who perhaps epitomise our idea of the “folk voice” had some of these same sentimental and romantic songs in their repertoires too.

Ultimately, we don’t know where he sang, but I suspect it was outside the home. If the house was big enough for a parlour to house a piano, and the family possessed the sheet music, he would have had less need to copy out the words into his own songbook, whereas if he was singing with a harmonic society or in the music room of a pub, he would have been more likely to need his own copy of the words for reference.

It seems he had a taste for relatively modern songs, and I certainly don’t feel he was recording a repertoire handed down to him through his family, but had seen these songs in print somewhere in order to copy them out.

The significance of Flanders’ song book and a comparison with folk song sources in King’s Lynn in the twentieth century is discussed as part of my presentation for the Folk Voice Conference, “100 years of Singing in a Fishing Community: King’s Lynn 1870-1970″, given on 18th April 2021. The talk, which lasts twenty minutes and includes numerous slides, may be viewed on the Traditional Song Forum YouTube channel, here.

With enormous thanks to the book’s owner and her family.

Thanks are also due to the wonders of local communities on the internet, especially the King’s Lynn Forum.

The newspaper report containing the names of the amateur minstrel entertainers is from the Lynn Advertiser, 9th February 1867.