Welcome to another in the series of posts about the traditional folk singers from King’s Lynn.

A few years ago Elizabeth James was kind enough to pass on to me a copy of a transcript she had made, whilst deputy curator at King’s Lynn Museum, of some field recordings of folk songs and interviews held by the museum. The interviews had been conducted on three separate occasions between 1965-1967, by Mike Herring, who had lodged copies of his tape recordings with the Lynn Museum. The actual recordings had, over the years, been mislaid.

At that time, the transcript was a great asset for a community arts project I created and managed in King’s Lynn, under the title North End Voices, and together with singers and tutors Chris Coe and Alan Helsdon, we were able to pass on some of the songs to new generations.

There was only one thing missing … those original voices! It was several years later that some far-flung pieces of the jigsaw eventually fell into place and I finally found someone who had safe keeping of Mike Herring’s recordings. There are now copies lodged back with the transcripts in the archive of True’s Yard Fisherfolk Museum in the heart of the old North End.

However, the tapes I have heard and the transcripts do not marry up exactly!

The original recordings have been edited into a compilation of songs only, with no conversation in between. The written transcript included George Bone singing The Titanic, but this was not on the recordings I have had access to, although there were two extra tracks, neither of which was mentioned in the transcript of the original recordings.  These are recordings of “The Samphire Man”, singing his tradesman’s call as he drove a horse-drawn cart around the residential streets selling this local seaweed delicacy, and a recording of a woman singing Roll the Old Chariot Along, possibly Jean Harding, but nothing more is known about her.

The main singer, with eight songs, is “Bussle” Smith. Mike Herring recorded him on three occasions, first on an unspecified date in 1965 when he sang The Drunken Sailor, then in April 1966 he sang Yellow Handkerchief (Flash Company), Rarum Tearin’ Fisherman, Golden Slippers, The Old Grey Mare and I, and finally, in December 1967 he sang Fill up Your Glasses (Easy and Free), The Bonnets of Bonny Dundee and Mother Machree (Land of the Shamrock Shore). On that occasion, Mike Herring also recorded an interview with Bussle and his daughter, Ethel Scott.

Ethel: “I mean like a few years ago they’d go up to the Tilden Smith and have a good old sing-song but there’s not many old ones left now that sort of remember the songs that you want to know, that’s the trouble.”

Bussle: “The Tilden Smith, I used that for years, ’cause I knew who the landlord was down there, been there about two year……. Then years ago I used to go round the pub on the Saturday Market Place, the Duke of Fife.”

Bussle: “We used to sing one or two of the old songs, some on’ us; several years ago I won a prize at Yarmouth Hippodrome when … I won two quid and two ounces of ‘bacca – but I never smoked in my life!” 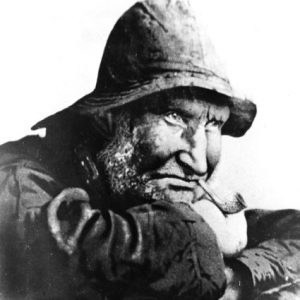 “Bussle” is George Edward Smith (1885-1970) who was the son of George William Smith. In the interview with Mike Herring, Bussle says that he learned some songs from his father who he remembered as only singing at home. His father, known as “Old Bussle” (pictured left) might well have been the “Mr Smith” who sang Bold Princess Royal for Vaughan Williams in the North End in 1905. Young Bussle followed his father into fishing, and married Harriet Benefer, daughter of another of Vaughan William’s singers, Lol Benefer. She died quite young and Bussle remarried in 1923, when he gave his occupation as fishing, but by 1939 he and his family had moved out to Smith Avenue and he was working in the sugar beet factory at the time the 1939 register was carried out. He may have carried on fishing part time, as work at the sugar beet factory was probably seasonal.

Ten years before Mike Herring carried out his first interview with Bussle, he had been featured in a radio programme made in the Tilden Smith, when he sang Golden Slippers and Drunken Sailor and also Yellow Handkerchief with his brother-in-law Tom Benefer. There is more about the 1955 radio programme here, in The self sufficient singers of the Tilden Smith.

Rarum Tearin’ Fisherman (with various spellings!) is the local name for a well known song usually called The Dogger Bank, and this has been immortalised in an art installation in Loke Road Recreation Ground, where a set of words has been engraved on a large rock. Some of Bussle’s songs are more unusual, and he must have been an active singer to have at least these eight songs in his repertoire. Younger members of his family still know the words to Golden Slippers, but I’m not sure any of them are active singers.

In the transcripts, this man is named as “Slinger” Woods, and he turned out to be John Harold Wood (pictured on the right here) who was a good friend of Bussle Smith. Bussle’s grandson Malcolm Smith told me that Slinger would go to the Smith’s house on Christmas Day “and sit there drinking navy rum & blackcurrant.” 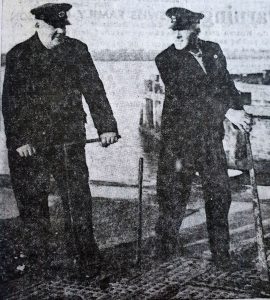 Mike Herring recorded four songs from him in total. In 1965 (date unspecified), Slinger Wood sang: Sailor Cut Down in his Prime. This is an old song, and was noted down in King’s Lynn in 1905 by Ralph Vaughan Williams from fisherman Joe Anderson.

In April 1966 Slinger Wood sang When the Flagship Victoria Went Down, Bounding Over the Raging Main and It was a Four-Wheeled Craft. 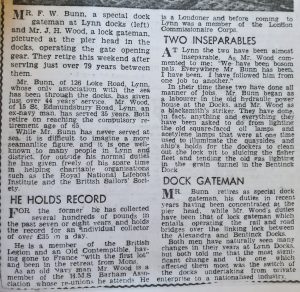 Slinger had a slow, powerful song delivery and some interesting songs – the first two are found only rarely in folk song tradition and the third is best known from barge skipper Bob Roberts under the title The Fish and Chip Ship. John “Slinger” Wood was born and brought up in south London and enlisted in the Royal Navy in August 1914, on his 18th birthday, at Chatham Docks. He left the Navy in 1926 and settled in King’s Lynn, marrying a local girl in 1927. They lived in South Lynn, near the docks, and had two children together before his wife died in 1937. Slinger worked as lock gate keeper on the docks, retiring in 1961, by which time he had moved out to a council house in North Lynn. 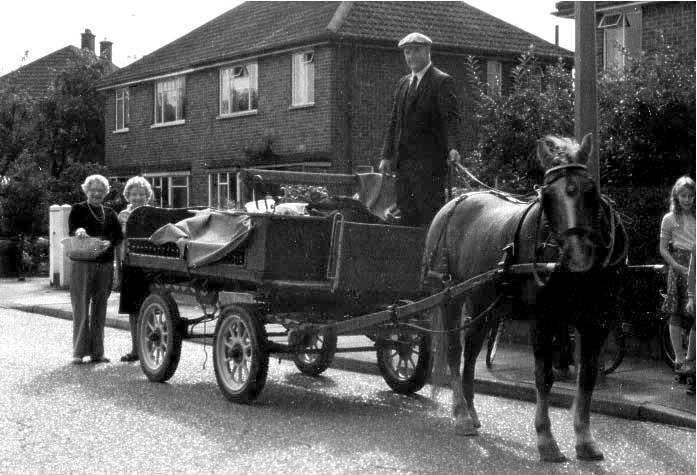 On the tapes themselves was also a recording of the “Samphire Man”, Henry Dewson (1920-2010). Henry sold samphire (a local seaweed delicacy) from his horse-drawn cart around the residential streets of King’s Lynn and surrounding villages for a couple of months every year, for a period of over seventy years. He and his family would go out to the marshes to pick it and then load up the cart and measure it out into his customer’s own receptacle, using an old saucepan as a measure. His way of letting people know he had arrived was to sing out – in what an obituary termed an “operatic” voice – the words

On the recording, he is clearly some way distant but the words can be made out clearly. Henry is not known to have been a singer in other contexts.

In the transcripts are the words to a song The Titanic sung by George Bone in December 1967, but unfortunately this song, which is rare in the oral tradition, is not on the recordings I have heard. 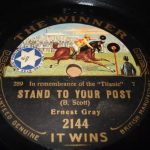 However, I have can at least tell you that it was recorded by Robert Carr (aka Ernest Gray), soon after the disaster happened in 1912, under the title Stand to Your Post, and you can listen to it here: https://www.encyclopedia-titanica.org/media/audio/stand-to-your-post.mp3

George Bone (on the right in the picture below) came from an old North End fishing family, but was brought up in the Victorian terraced streets just outside the old fishing quarter. He enrolled in the Naval Reserve in 1915 and returned to fishing after the First World War. He is said to have been quite successful in the cockle business and owned two fishing smacks. 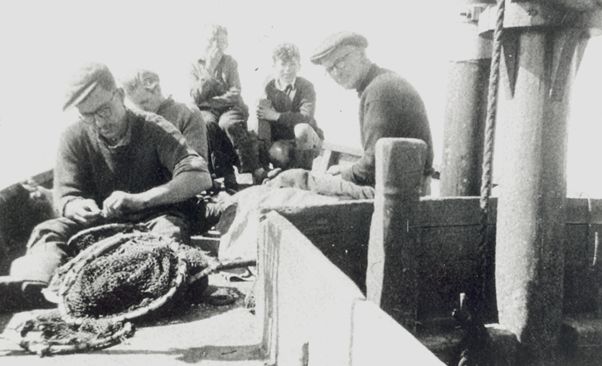 Mike Herring also interviewed Turk Pratt and Bill Chase about their memories, and the names of Trunky Bunn, Tippenny Goodson, Turkey Stevens and Charlie Fysh, Tom Senter, Dave Scott, John Benefer were all mentioned in conversations about singers who had then passed on.

There is more information about Charlie Fysh on The self sufficient singers of the Tilden Smith and about Tom Senter on The fishermen that got away.

Thanks (as always, in relation to my King’s Lynn stories) to the wonderful Trues Yard Fisherfolk Museum, and also to Liz James, Mike Herring, Pete Shaw & Johnny Adams.

Images courtesy of Trues Yard Museum and Kings Lynn History Forum. I found the photo of the stone in Loke Road Recreation Ground on the Hullandhereabouts blog.